A core part of our work at What Works Scotland involves working with our case study partners in four Community Planning Partnership (CPP) areas, one of which is West Dunbartonshire CPP.  In our first meeting with local officers from the local authority we were struck by the complexity of the long-term challenges in the area as well as the knowledge and tenacity of its staff. The work of local officers spans a vast range of policy areas from economic regeneration, education, unemployment, long- term ill health and comorbidity, equalities, as well as local history, tourism and culture (Dumbarton Castle sits on the site a pre-historic fortress and has a longer history than any other site in Britain; at the same time the council area borders the southern end of Loch Lomond).

According to the 2014-17 Single Outcome agreement, West Dunbartonshire is the tenth smallest Scottish local authority by population (circa 90,000) and the second smallest in terms of land area. It is due west of Glasgow, has many of its neighbour’s socio-economic challenges (and West Dunbartonshire’s share of the worst 5% of Scottish Index of Multiple Deprivation (SIMD) datazones has doubled in the last eight years). West Dunbartonshire combines a high density settlement (Clydebank) with a more rural hinterland beyond the market town of Dumbarton. In addition to struggling to manage the post-industrial economic context, West Dunbartonshire has relatively high levels of ESA and JSA claimants and employment or income-based deprivation. Structural determinants also probably account for high measured levels of health inequalities. 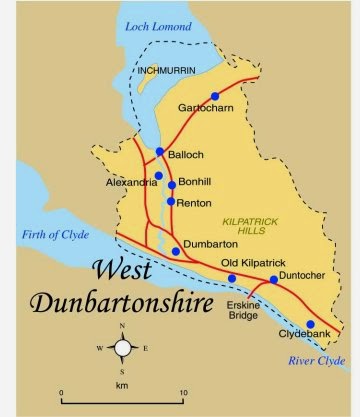 We have been thinking about fractals: naturally occurring phenomena, like a coastline, characterised by possessing the same fundamental shape at different scales. In the coastline example, we can see the same jagged shape close up in detail or further away for example measured by satellite. The beginning of the community planning partnership case study collaborative action research appears to in some ways demonstrate similar issues but this time in terms of governance challenges of similar kinds re-emerging at different spatial scales.

As in Glasgow, the West Dunbartonshire community planning partnership network is proposing to establish a place-based neighbourhood approach to public service reform. In Glasgow, the similar policy is Thriving Places. In many respects, both cases involve replicating partnership ideas and mechanisms down to local level from the CPP. The intention is that resources, partnership working and integration will be focused on local priorities that can deliver improved public services and better community outcomes.

The initiative is taking place at a time of immense budgetary pressure, which is manifested across the Council in multiple ways. These cuts have implications for both staffing in the Council and the CPPs but also of course for services. CPPs have to deliver and integrate improved services with fewer funds and less backroom capacity (e.g. analytical and research functions). This is against a backdrop of competing pressures across the CPP landscape (e.g. health and social care integration, and new responsibilities for areas like community justice, etc.).

It is clear that strong leadership from the senior officers in the West Dunbartonshire CPP will be needed to ameliorate the worse effects of austerity whilst devolving power to local areas. Yet, perhaps an even more significant challenge will be finding a way to shift from an incremental approach to improving public service towards an integrated preventative agenda. We are looking forward to working with officers and communities in West Dunbartonshire on taking that agenda forward.