Continuing to learn from international experiences of participatory budgeting

Coryn Barclay, research consultant at Fife Council, took part in an international learning visit to Paris in December 2016, supported by what Works Scotland, to consider how Scotland could learn about participatory budgeting and public sector reform.

Two years on, she was invited to participate in an international round table discussion at the Third National Meeting of Participatory Budgeting, hosted by the City of Montreuil on 8/9 November 2018, again in Paris. Here she shares the experience. 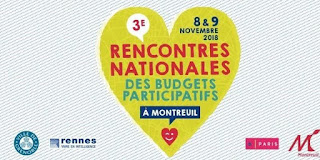 
This time around, I found it a much more immersive experience. The conference was in French so my first challenge was to tune in to the language, and to follow along where I could. It helped enormously that the subject matter of the conference was familiar to me.


On the Thursday afternoon, the City of Montreuil arranged a bus tour around the city and its PB projects. This helped me to go out and look and get a feel for the local context, and for the type of projects that are being developed through PB in Montreuil, including:
A couple of active members of the community in Montreuil took me under their wing on the bus tour, providing me with additional commentary, and sharing their own local knowledge, which greatly added to my enjoyment of the tour, as well as giving me the opportunity to try out my own language skills.


Tania Assouline, Première Adjointe to the Mayor of Montreuil, welcomed the international delegates to Montreuil at an evening meeting. In addition to myself, this included Marta Osòrio from Cascais, Portugal, and Carlos Menchaca from New York, who had also been invited to share their experiences of participatory budgeting, and would be on the panel with me the next day. We were also able to meet the organising team from Montreuil – Julien Roman and Sylvie Baste – who had made it possible for us to be here.

My confidence grew as the day went on. I was able to follow along with the evening panel discussion led by Yves Sintomer – a French academic studying the development of PB processes – at La Marbrèrie, on the impact of participatory budgeting on democracy. The panel was run in a very relaxed and inclusive way, with audience members coming up to ask their questions of the panel, and enjoy their five minutes in the spotlight. Over dinner, Marta, Carlos, Gilles and I used a mixture of French and English to share our experiences of participatory budgeting in our own contexts, and to plan for the event the next day.


The amazing La Mèlies Cinema was the venue for the international round table discussion on the Friday morning. The discussion was hosted by Gilles Pradeau, University of Westminster. Gilles was part of our group that visited Paris in 2016, and he recently came to meet with us in Kirkcaldy, Fife, to share some of his findings with us about comparisons between PB in France and Brazil. Gilles reflected on the differences between PB in Brazil and in Europe, noting that social justice is a greater driver for PB in Latin America. He also spoke about where consultative PB has been introduced in Europe it has not been able to be sustained, but where PB has been co-decisional, such as in Cascais, then it is more likely to be sustained. This has implications for how we take things forward in both Fife and Scotland. It was great to hear Kirkcaldy and Fife get a name check from Gilles ahead of both Cascais and New York!

Carlos Menchaca, Councillor for Brooklyn, the 38th District of New York, shared his own personal story and experience of PB in the city. As a city agency official assessing the feasibility of PB projects, he was so energised by the concept that he ran for the district council on the promise that he would bring participatory budgeting to District 38. Each councillor has a discretionary budget of $5million for projects in the district. In New York volunteers have a key role to play in discussing community priorities, equity and impact of submitted project ideas, before meeting with city agency representatives to determine capital eligibility and cost. Approved project proposals become ballot items for the community to vote on in the spring. 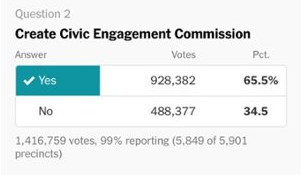 Twenty-seven of 51 New York Districts are using participatory budgeting as a method of deciding how the budget should be spent, with an average of $1million decided through PB. In Brooklyn, the amount decided through PB is four times that of other districts at $4 million per year. In a landslide vote, New York has just passed a referendum to create a Civic Engagement Commission tasked with setting up PB citywide.

Marta Osòrio presented a short film of Cascais Participatory Budgeting in Portugal, before sharing details of the process through a presentation.


Cascais’ process is in its eighth year and it has evolved and adapted over time. Interesting aspects include the use of text messaging for voting, and use of codes so only people in the local area can vote. They also have introduced a ‘counter vote’ where citizens can vote against a project, with the final vote reflecting the net score.

If you are interested in finding out more about the background to PB in Cascais you might want to read Vanesa Fuertes and Nelson Dias’ book: A City Starts with People 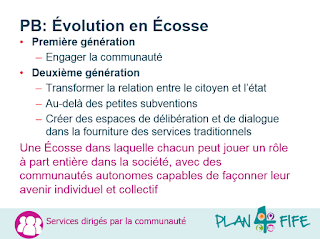 I then gave a presentation based on Fife’s experience, highlighting what we have learned from reflecting on Fife’s PB Story since 2010, and where there might be opportunities in Scotland to move to the mainstream to meet the target of 1% of a local authority budget set by PB by 2021. The challenge for us in Scotland is how we move beyond small grants to creating more space for deliberation and dialogue that enable us to transform the relationship between the citizen and state, and through this create a Scotland in which each person can fully play their part in society.

For the French audience, the Fife example is quite different from the way that many cities in France are implementing PB because 1) that we are not a city, but a diverse geographical area with a mix of urban and rural areas, but also 2) that our starting point has been greater engagement of local communities through small grants, rather than large scale capital projects. However, that was the aim of the international round table discussion to expand and broaden out the thinking about PB in France.

In the afternoon, a number of parallel workshop sessions were held. The first workshop was on ‘Imagining a network of cities with participatory budgeting’ to discuss establishing a national network for PB in France. We thought about how it might be organised and its purpose – to share information, and to ensure the quality of PB through a charter. I was able to share what has been happening in Scotland through the PB Scotland network, the national support programme from COSLA and the Scottish Government, and the recent process of co-producing a Charter for Participatory Budgeting in Scotland. I got a round of applause from the workshop participants for doing this in French!

The second workshop was on ‘How do we evaluate participatory budgeting?’ Participants considered this from the perspectives of:
Our group focused on internal services. When asked about what had been our biggest failure in PB, Carlos shared an example from New York of project to install security cameras, which had not been implemented four years after people had voted for them. This highlighted the importance of identifying the right people and building relationships with services within an organisation to support the implementation and delivery of PB projects.

The event concluded with citizens from Montreuil, Rennes and Grenoble feeding back on their positives and negatives from the conference, and their hopes for the network for 2019. The International round table session was highlighted as the leading positive, with the main negative perceived as not enough time for the workshops. There is certainly interest in France in continuing to share learning between cities around PB, and interest in hearing more about other international experiences at their fourth meeting in Paris next year.

As with two years ago, I am back in Fife with renewed enthusiasm about the potential of participatory budgeting in Scotland, and what we need to do locally to transform the way in which communities can get involved in decisions that matter to them in their local areas.