Third sector leadership – the promise of collective accounts of leadership

James Rees, Carol Jacklin-Jarvis and Vita Terry from the Centre for Voluntary Sector Leadership have provided this guest blog.

They examine the challenges and opportunities offered by adopting collective leadership practices in third and voluntary sector organisations.

A recent What Works Scotland literature review paper sets out interesting theories for understanding public service leadership, with a particular focus on the collaborative context that is key to much public service delivery in Scotland and elsewhere.  We at the Centre for Voluntary Sector Leadership have been exploring the UK literature that relates to third sector leadership, and it is interesting to put our findings into closer dialogue to enrich the debate on leadership within and across sectors.

Christopher Chapman and colleagues discuss a range of leadership theories – transactional transformational, ethical – that, loosely speaking, could be considered to place the emphasis on the individual at the top, a so-called 'positional' definition of leadership. Broadly speaking, academic leadership debates have moved on from this individualistic lens, concerned that it can be 'elitist' and over-emphasises a 'heroic' model of leadership. But they go on to acknowledge the importance of the collaborative context that is a feature of the delivery of contemporary public services not only in Scotland but across much of Western Europe – and one that includes many non-state actors such as third sector and community organisations. 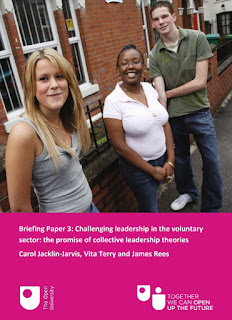 We also observed that traditionally, debates on leadership in the voluntary sector have focused on the individual, heroic leader, often the founder/CEO of a charity. For a number of reasons our work, specifically our third briefing paper (PDF) increasingly draws on a range of 'collective' leadership theories emerging from wider debates across a range of social science disciplines. For us, this partly reflects a recognition that the voluntary, or third, sector presents a specific context that places demands on leaders to work in ways that are inherently collective.


Collective approaches to leadership offer a process perspective, in which individuals and stakeholders influence one another relationally, share responsibilities, and hold one another accountable. This understanding of leadership resonates with the democratic and inclusive values of many voluntary sector organisations (VSOs), and reflects structural requirements to share leadership between individuals with different roles and responsibilities. Collective leadership is embedded in the make-up of a voluntary organisation, with its distinctive governance structure (particularly boards of trustees).

Finally, the collective leadership lens deflects attention from the 'traditional' leader at the top, helping with the idea of bringing leaders through. A key challenge is how to embed this in new approaches to leadership development – which is often resolutely person-centred – but there is evidence this increasingly resonates with the 'millennial' generation, as this NCVO blog shows.

Leadership is a tricky and contested field, with many overlapping theories that are rarely brought into dialogue. In relation to What Works Scotland, we wonder if collective leadership theories could be useful in interpreting and supporting the public service reform process in Scotland, which is inherently multi-actor, collaborative, and collective. In addition, given that the third sector is – as elsewhere – closely involved in public service delivery, the insights derived from collective leadership approaches would help to understand leadership within the sector and its attendant challenges, gaps, and development needs.