Dr Ailsa Cook from Outcome Focus, Dr Guro Huby from University College Østfold and Dr Sarah Morton from What Works Scotland reflect on the Scottish and Norwegian approaches to improving public services for people with mental health issues and addictions. 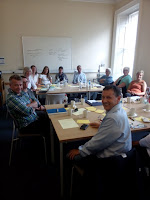 A couple of weeks ago we spent the day with twelve Norwegian managers and user representatives committed to improving services for people with mental health issues and addictions in their municipality, Fredrikstad in the south of Norway. The managers occupied positions across their local mental health service system, working in specialist and primary health and social care. There were also two representatives from a user organisation representing former drug users, and one representative from a carer organisation.  The group had come to Scotland with four academic colleagues from Ostfold University College (including Guro Huby) to find out more about Scottish approaches to improving public services and the What Works Scotland approach to Collaborative Action Research.


As is often discussed, Norway and Scotland share many similarities. They are both small nations, with a mix of rural and urban populations and demographic challenges driving the need for change away from acute hospital care towards preventative, community care. Both nations have boundaries between health and social services, though placed in different ways: in Norway the key boundary is between state owned specialist hospital trusts on the one hand, and municipally run primary health and social care services on the other. Both countries have a long history of policy around “partnership working” (Scotland) and “co-ordination across service interfaces” (Norway). In both countries policy is recently formulated in terms of legislation to drive forward improved co-operation between sectors.

There are, however, differences. In Scotland, Integration of Health and Social Care is seen as a primary mechanism to drive efficiencies, whereas in Norway the main mechanism is economic sanctions and rewards, for example around delayed discharge in hospital. Whilst fiscal pressures are present in Norway, these pressures are not felt to the same extent as here. As one manager highlighted, whilst budgets for specific activities are tight, everyone knows that there is money in the bank if it is required. The user representatives observed that the third sector was less strong in Norway, and whilst they identified ‘patient rights’ and ‘user focus’ as cornerstones of Norwegian public service policy, they felt the voice of users was less prominent, with self-advocacy organisations having limited impact.

Importantly, there are differences in terms of service improvement, although as a group we found it hard to pin these down. The challenges of improving services and partnership working raised by the Norwegian managers would be familiar to their Scottish counterparts, co-location, communication, trust, governance and relationships were all highlighted, but how they are addressed seemed somewhat different. Within Norway there is a heavy reliance on legislation and pathways, with organisations monitored in terms of compliance with process, rather than outcome of what they do.
Of various approaches to improving public service we discussed two seemed to resonate most closely.
1.     Focus on the outcomes important to people using services through practice e.g. Talking Points: Personal Outcomes Approach
2.     Planning and evaluation of complex service systems using Contribution Analysis.

Whilst the concept of outcomes was new to this group, they found that it provided an anchor to examine their system more analytically. As one user representative said, if we organised our delivery around the outcomes important to people, service integration would naturally follow.

The Fredrikstad group is currently engaged in a project led from the University College in Østfold to map the service system for people with mental health and drugs problems. They are working to identify the most vulnerable transition(s) where co-ordination fails and users are unsupported. The next stage is to select one or more “transitions” for an improvement intervention, drawing on and adapting a What Works Scotland action research approach. We could also try and build in a comparative element between Norway and Scotland in the area of service improvement and the way structural conditions shape this effort in the two countries.